In Germany – the main market for biomethane production and consumption – 88% of biomethane produced in 2017 was used at CHP for combined power and heat production, 5% for heat supply and only about 5% for transport (Fig. 1). The use of biomethane in the chemical industry and for export to other European countries plays a minor role in Germany (2%), but has a high potential for development. 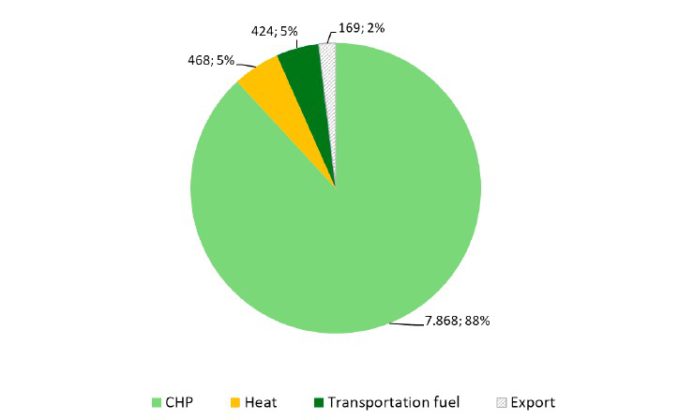 Biomethane can be used in all engines operating on natural gas. The market presents a lot of modern gas engines for cars, heavy vehicles, ships and trains that can work on biomethane. Most car manufacturers offer models that operate on compressed methane. There is also the possibility to refit a petrol engine to gas-powered engine. Approximately 10% of biomethane produced in Europe is used as a motor fuel, especially in countries such as Sweden, Germany, Finland, Switzerland, Iceland (Table 1).

Thus, different approaches to the development of markets for the production and consumption of biomethane are being implemented in European countries.

The feasibility of producing and using biomethane in Ukraine is as follows:

1. Possibilities of increasing the natural gas analog production, replacement of imported natural gas, reducing the degree of energy dependence.
2. Creation of an alternative to fossil fuels for transport fuel, replacement of imported petroleum products – gasoline and diesel fuel.
3. Recovery of a stable renewable energy source with the possibility of its accumulation in gas networks.

The production of biomethane from biogas involves additional costs for the separation of methane and carbon dioxide. Therefore, the unit of energy in biomethane is more expensive than in biogas. On the other hand, biogas can be used for the production of electricity and heat, while for biomethane new opportunities are opened which, in the conditions of Ukraine, includes: