Experience of using agrobiomass in Denmark

Due to the implementation of a focused energy policy, Denmark became a world leader in the production of energy from straw. In addition, today Denmark is a center, where the leading manufacturers of equipment running on agrobiomass represented, as well as a large number of facilities with a variety of technological solutions and parameters [1]. Why did this happen and what was the impetus for the development of a new direction?

Historically, Denmark has a low level of forest cover, which has given impetus to the rapid development of agricultural waste use. Already in 1976, the first energy program “Danish Energy Policy 1976” was adopted, after which the country became well-known for its active energy policy aimed at energy efficiency, energy-saving, and sustainability [2]. In 1993, a parliamentary majority agreed on a Biomass Action Plan, which required central power plants to consume 1.4 million tons of biomass per year, including 1 million tons of straw. And in 2019, the Danish parliament passed a new climate law that aims to reduce greenhouse gas emissions by 70% by 2030. A decentralized approach to heat supply, high taxes on fossil fuels, and imported energy resources have contributed to the development of renewable energy in Denmark. The ban on the open burning of straw in the fields was a significant factor that contributed to the reorientation and rapid development of the energy use of straw.

The Danish Institute of Technology was involved in long-term energy planning in the country. The directions of further development were determined based on development scenarios, forecasts of production and consumption of energy and fuel, fuel prices and tax policy. These directions also based on the use of local renewable resources, including agricultural waste. Long-term planning and government support have contributed to the creation of engineering companies and factories for the production of new specialized equipment. Decentralization in the field of heat supply has contributed to the creation of a large number of energy cooperatives, co-owners of which were both fuel suppliers and consumers of heat energy. Cooperatives independently determined the level of tariffs for thermal energy, fuel purchase prices, and the level of other operating expenses.

In 2018, solid biofuels accounted for 64% of Denmark’s total renewable energy consumption. At the same time, wood accounted for 48%, biodegradable waste – 9%, and straw – 7%. 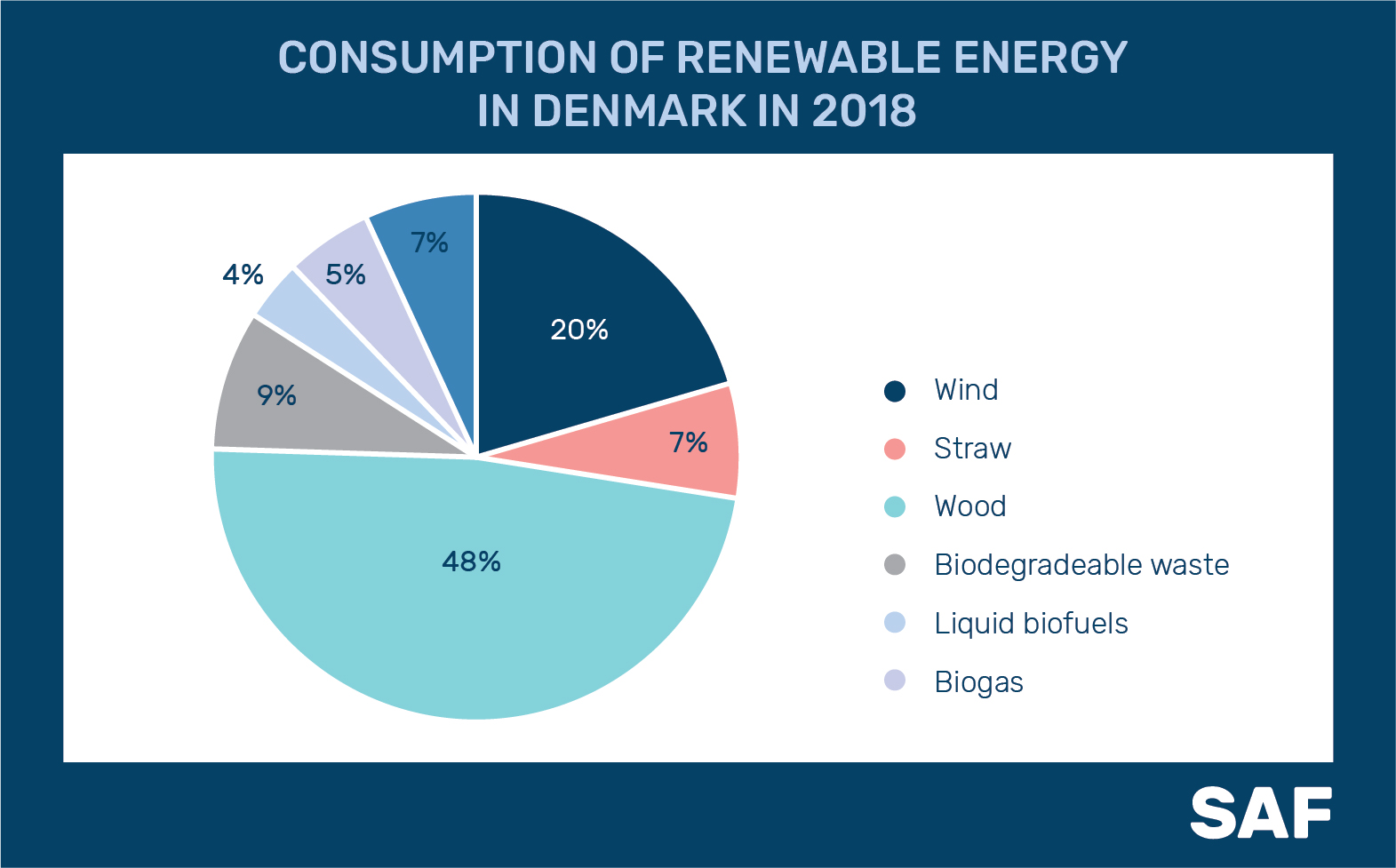 Consumption of solid biofuels for energy purposes in Denmark increased from about 40 PJ in 1990 to 157 PJ in 2018. At the same time, straw, waste, and firewood were the main solid biofuels until 2000. Currently, wood pellets are the most widely used. But straw still provides significant amounts of energy production. In 2018, the consumption of energy produced from straw amounted to 17.6 PJ, which equivalent to 1.6 million tons/year. 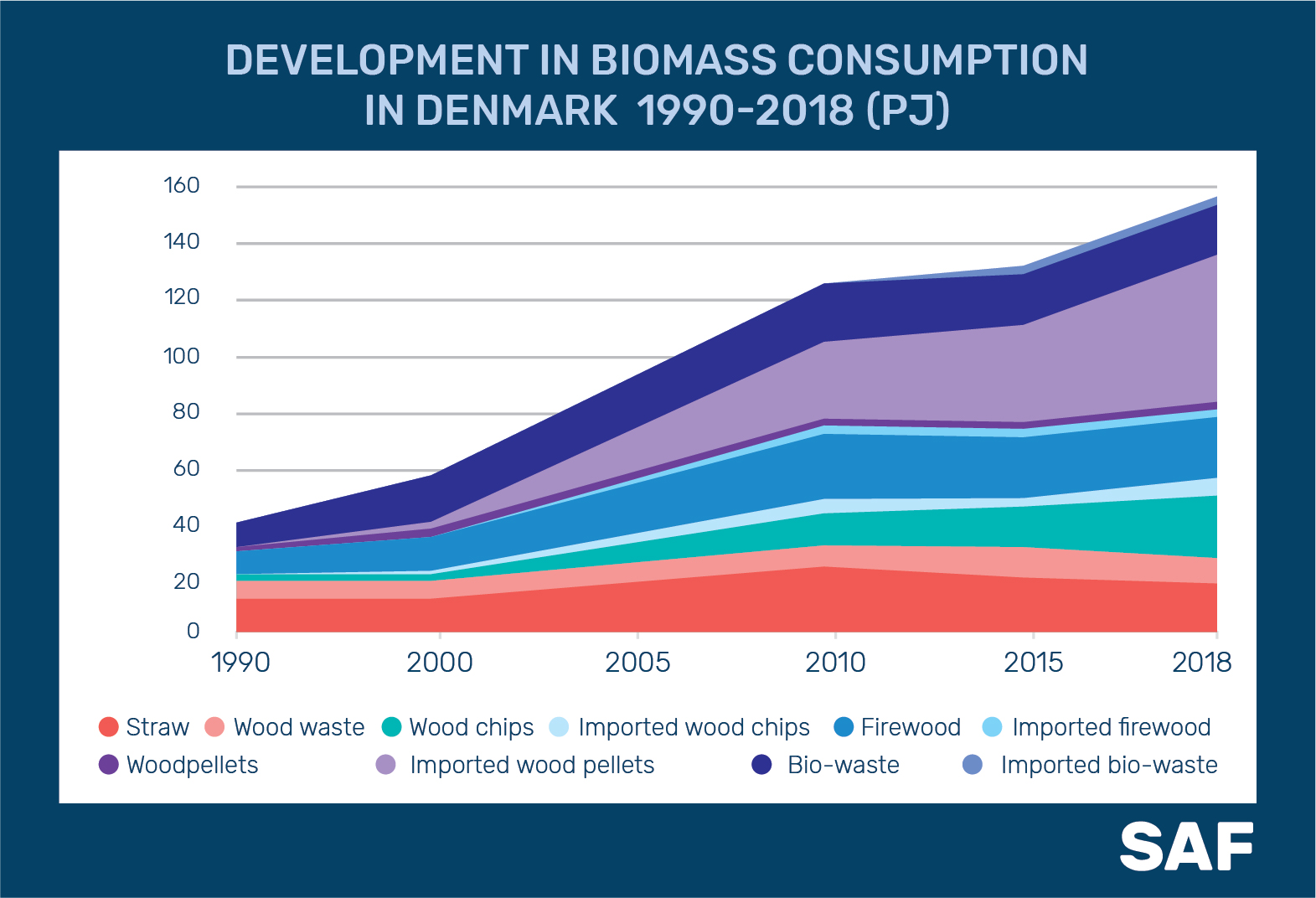 From 2013 to 2019, the total straw production in Denmark averaged about 5.5 million tons per year. At the same time, approximately 40% of straw remains in the field, 33% is used in animal husbandry and 27% is used in the energy sector. 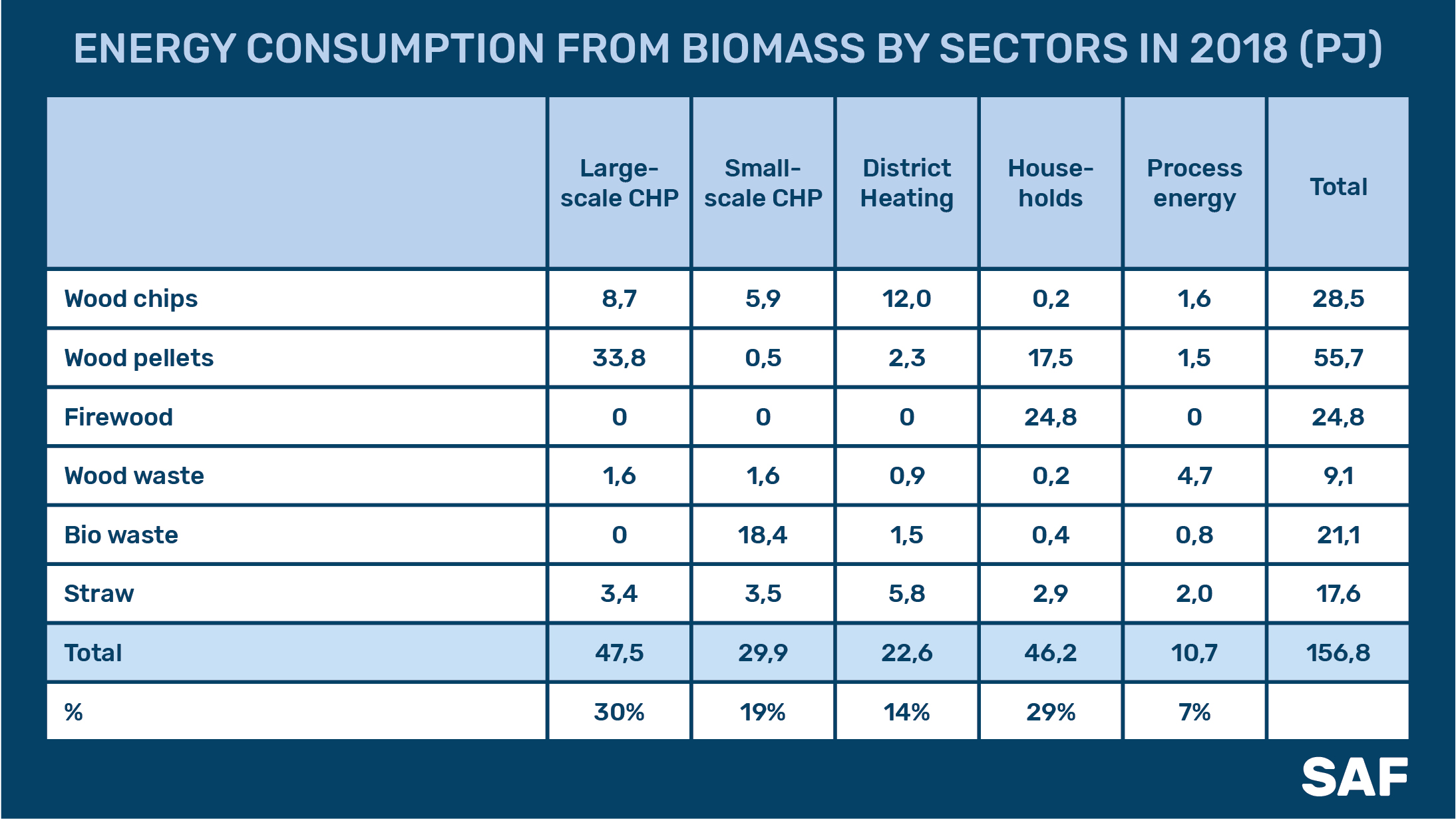 CHPs consume much larger volumes of straw than district heating boilers. For example, the Fung CHP uses 150-170 thousand tons of straw per year, which is equivalent to more than 300 thousand large bales. The Lisberg CHP burns up to 240,000 tonnes of straw a year. In addition, CHPs together with straw use wood chips, solid waste, or fossil fuels. All power plants operate in cogeneration mode with high efficiency, which allows providing low cost of heat and electricity.

In the future, in the process of developing and reducing the cost of relevant technologies, straw can also be used for the production of liquid biofuels, renewable gases, as well as a variety of biomaterials and products.

[1] UABIO Position Paper №24. Agricultural residues for energy. What you should know about organizational and technical solutions: https://uabio.org/en/materials/8685/.